Scammers have been calling, pretending to be people from the FTC. While the names they use might be real, they’re actually scammers — some of them hoping to trick you into thinking they’re an FTC Commissioner. But they’re not. Whether the caller promises you a prize or threatens you with arrest — and even if they give a (fake) badge number — that’s a scammer. So that call from someone who wants your money or info, and says they’re Commissioner Alvaro Bedoya from the FTC — or Commissioner Noah Phillips, Commissioner Rebecca Kelly Slaughter, Commissioner Christine Wilson, or FTC Chair Khan? That’s a scam. 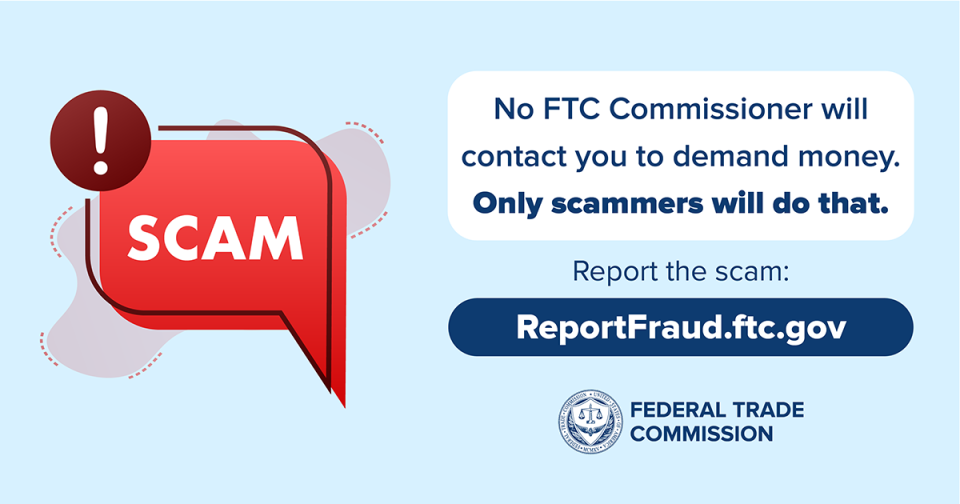 Scammers like these might demand access to your bank account. They might tell you to pay them by loading money on gift cards, buying cryptocurrency, or using a money transfer service like MoneyGram or Western Union. They could say it’s a way to avoid jail, pay a fine, settle an unpaid Amazon balance, or even collect a prize. But it’s a scam.

Here are three things to know about this scam:

Don’t respond to anyone who says they’re an FTC Commissioner or the FTC Chair — they’ll never call you to demand money, threaten you with arrest, or promise you a prize. Instead, report the scam to the FTC at ReportFraud.ftc.gov.